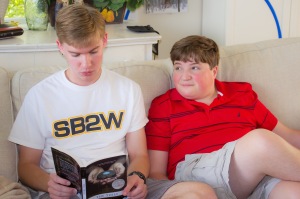 I have to apologize for the big time lag between posts on James’ blog.  The truth is that James is writing so much for his high school literature and composition class that I have trouble convincing him to write anything extra, even to post here! Fortunately a recent essay he wrote for class is perfect for “Returning James” because it talks about his experience meeting a peer who was willing to see beyond the outer exterior of autism and get to know the “real” James. This young man made a big difference in our lives, and we are grateful for him. The essay assignment is to write a letter to a book’s author and explain why it was particularly meaningful. The essay is below:

We have never met so you don’t know me. Until two years ago, my whole life was a guessing game. No one knew me.

I lived in my own head in an imaginary world. I dreamed of walking, talking, and being normal, but then I awoke in my autistic body, immobile. All day I thought about my world and taught myself how to do so many things. Yet I was also plagued by doubt. No one could hear the thoughts in my head or understand how I perceived the world. Maybe I was delusional. Maybe I really was as disabled as my teachers thought I was. Maybe I did belong in the special school. Then my savior showed me that my dreams were possible.

Consequently, I found myself living my intellectual dream in a high school group last fall. Unfortunately, because of my inexperience, I lacked the ability to belong in a group of typical peers. Did you know that communicating your intelligence loses its importance if you have no friends? I became lonely and hopeless, but one student sought my friendship and he changed everything.

This teen set aside time to get to know me. The real me. Despite his efforts there was a glass wall between us. He could not understand me because he never had a friend like me. Then he recommended that I read The Lightning Thief. We both love mythology, but I thought your series was too juvenile for me because I had a long list of classics to read. But I was wrong. Percy Jackson showed me that my disability can be my strength, but also that other people can understand my struggles.

The first chapter enveloped me in despair because everyone misunderstands Percy Jackson. His diagnoses include dyslexia and ADHD, but his teachers perceive him as intellectually disabled and a behavior problem. He struggles to maintain friendships because of his proclivity for trouble and his transient enrollment in schools. These characteristics made it difficult for him to make friends who really understood him. At this current school, however, he found a real friend in Grover. This friendship made me realize the power of perspective.

Perspective can change the outcome of anything. After years of teachers and students blaming Percy for his difficulties, he actually began believing them. When a teacher, Mr. Brunner, challenged Percy and believed in him, Percy doubted himself. Grover and Mr. Brunner saw Percy for who he really was, a demigod. Their perspective allowed them to see Percy’s strengths and Camp Half-Blood showed Percy that they were right.

You might be wondering how this plot connects to me because I am a teen with autism. I realized that I am similar to Percy despite our obvious differences. I doubted myself and refused to believe that someone could really like me for who I wanted to be. This new friend did understand me because he knew that people are more than they seem. He knew that my perceived weaknesses could be my strengths. He was my Grover. He did not know exactly who I was, but he had faith that I was more than my disability.

My friend’s faith in me encouraged my own faith in myself and gave me hope. In moments of need Percy sought water, his source of strength, but I use God’s love. My new friend showed me that I am strong and that I have the power of God to help me when I am not quite strong enough. All of my weaknesses I can also see as strengths. My limited speech makes me a better listener; my autistic body makes me a harder worker; my overwhelming emotions make me more empathetic. I am a person who can be more than I seem, just like Percy, all it takes is the right perspective.

Obviously, The Lightning Thief, and the characters in the series, changed my perspective of myself. My future used to be bleak, but now it is unlimited. I still have autism, but now I can see my own strengths. Furthermore, I have learned that people can understand me if I let them see who I really am, beyond my autism. I can be my own hero.

4 thoughts on “The Power of Friendship”