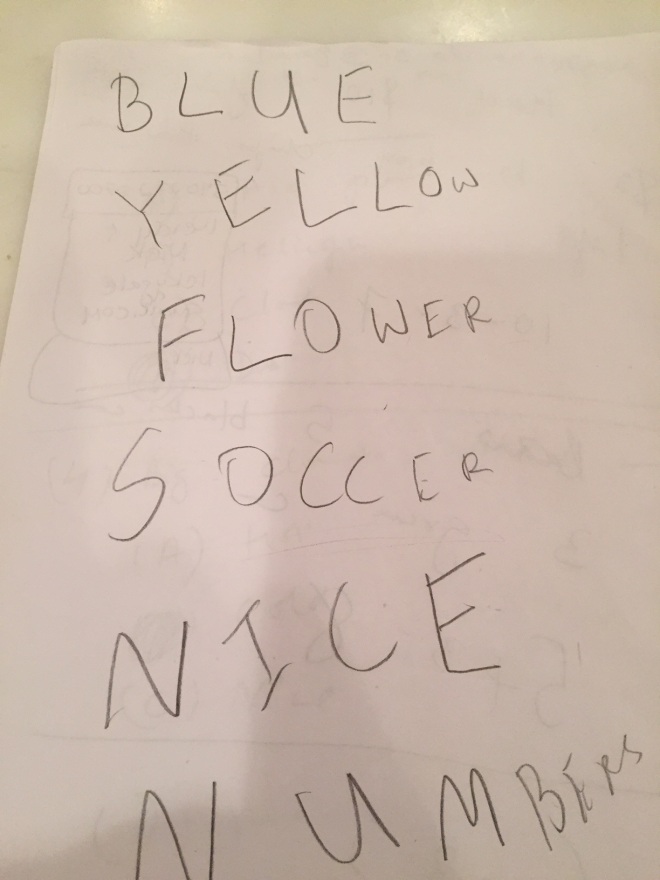 Three years ago today James walked into a room and was asked by Soma if he would prefer to discuss science or history, he pointed to the “s” for science and from that point on everything changed for him.  It was the first time he was able to express his understanding of a topic in a meaningful way and the first time he was given a reliable means of communication. Imagine. When asked this summer what he felt the first time he used a stencil board to spell he said “hope, hope was eating me alive”.

In honor of this three year anniversary I thought I would post a picture of the very first “open” words James spelled with Soma on April 11, 2013 and then also repost a story he wrote a year later.  The words in the photo are answers to these questions: what color is the sky, what is your favorite color, what does yellow make you think of, what sport would you like to play, what would you like to work on next?

This story he wrote about a year later and I think it expresses so poignantly what getting a voice means to James, our family and all people who don’t have the ability to produce reliable speech.

ONCE UPON A TIME THERE WAS AN UNUSUAL BOY WHO COULD NOT TALK. HE WAS VERY LONELY. HE LIVED IN A TOWER OF SILENCE. THE BOY WAS ALWAYS THINKING. HE THOUGHT ABOUT ALL THE THINGS HE HEARD DURING THE COURSE OF HIS LIFE. THE BOY HAD NOTHING BUT TIME TO CONTEMPLATE LIFE AND PEOPLE IN IT. THEN ONE DAY HE WAS INTRODUCED TO A POWERFUL WIZARD WHO GAVE HIM A MAGICAL BOARD THAT TRANSLATED HIS THOUGHTS INTO WORDS! THE BOY WAS ECSTATIC! HE WAS NOW ABLE TO COMMUNICATE ALL HIS THOUGHTS. AFTER THE BOY STARTED USING THE MAGICAL BOARD HIS ENTIRE LIFE CHANGED. PEOPLE STARTED TREATING THE BOY VERY DIFFERENTLY. THEY WERE SHOCKED BY HOW MUCH THE BOY KNEW AND THAT HE WAS CAPABLE OF LEARNING AT ALL! THE BOY KNEW THAT HE HAD TO HONOR THE GIFT OF THE MAGICAL BOARD. HE MUST USE THE BOARD TO TEACH THE WORLD ABOUT OTHERS WHO ARE STUCK IN THEIR OWN WORLDS OF SILENCE.
THE BOY WAS ALREADY FAMILIAR WITH THE PERCEPTIONS OF PEOPLE ABOUT HOW THOSE WHO DO NOT SPEAK. HE HAD TO BLAZE A NEW TRAIL FOR THE OTHER SILENT PEOPLE. HE HAD TO SHOW THAT SILENT DOES NOT EQUAL STUPID. THE BOY KNEW THE BEST WAY TO LEAD WAS THROUGH EXAMPLE. HE USED THE MAGICAL BOARD TO SHARE HIS WORDS WITH THE WORLD. THE BOY WAS ADORED BY ALL AND SLOWLY LED THE SILENT PEOPLE INTO THE WORLD!